You are here: Home / Dating / WARNING! Oxytocin is NOT a Love Drug! 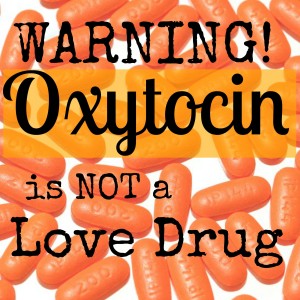 Oxytocin: The Hormone of Love

Oxytocin is a hormone that is produced naturally in the human body. Because it’s released when people snuggle or bond, oxytocin also known as “the love hormone” or “the cuddle hormone”. Most importantly to your dating life, oxytocin is often the reason you feel attachment to a lover. Similar to how endorphins produce a feeling of euphoria after you work out, oxytocin produces a feeling of closeness after you’ve bonded with your partner, physically or emotionally.

In recent years, oxytocin has been hailed as a sort of love drug. And many women have reported how the effects of the oxytocin drug have made them participate in low-value (translation: DESPERATE!) behavior with their guy. While oxytocin is an actual hormone released by the body, and people indeed feel that euphoria, to call it a DRUG is incorrect, as that would imply that you have no control over your emotions. So today Dating.Relating.com is going to break down what oxytocin is, and is not.

The excitement over the oxytocin love bonding began in the 1990’s when researchers discovered that breastfeeding mothers were calmer than bottle-feeding mothers. They learned that the oxytocin hormone is released in large amounts at the time of labor, and has proven to be an aid in childbirth, maternal bonding, and lactating.  Interestingly enough, the name oxytocin is derived originally from the Greek for “swift birth”, and a synthetic version is currently administered to speed or induce labor.

Scientists later discovered that oxytocin is released whenever we bond with another romantically. From foreplay, to lovemaking, to the afterglow, high levels of that juicy oxytocin love hormone is released in our bodies.  The purpose of oxytocin is to create a feeling of bondedness, and we can’t help but want it to go on forever.

Under the influence of “oxytocin”, women have admitted to doing some crazy things to re-connect with a man they want. But honestly, they’d be better off using the excuse that The Devil made them do it! 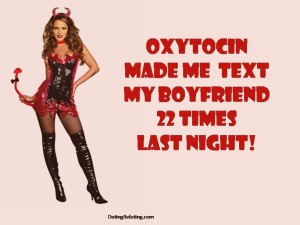 Is Oxytocin a Love Chemical or an Excuse?

As wonderful as the effects of oxytocin are, it’s important to remember that you have a brain that has the power to override emotions. This same brain is what kept you from murdering your boss last week. And this same brain is the voice of reason that tells you that calling your ex at 1am is not a good idea. You may call him anyway, but don’t you dare blame it on oxytocin.

“Oxytocin isn’t a magic nectar that will bond you to each and every guy you have sex with”, says Katarina Phang, author of He’s That Into You, He’s Just Not Ready. “It might make you like him better if you are on the fence about him, but if you don’t feel that much to begin with it won’t change anything.

When you can manage your emotions,” continues Phang, “you will no longer fall for the wrong guys, or be a slave to a hormone.” 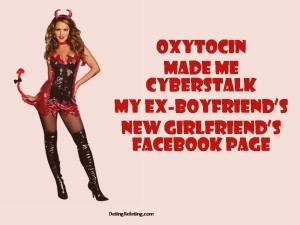 Aside from its role in childbirth, oxytocin is produced in both males and females, and receptors for it are found all over the brains and reproductive systems of both sexes. Researchers have discovered that oxytocin evokes contentment, reduces anxiety, and supplies feelings of calmness and security when in the company of the partner.

“A woman’s raison d’etre is to bond,” says Katarina Phang, author of He’s That Into You, He’s Just Not Ready. “Bonding feels great to us, much more so than freedom, because it releases oxytocin that decreases our stresses.

“Conversely,” Phang continues, “freedom releases testosterone for a guy, which is the antidote to his stresses. That’s the scientific explanation of the push and pull between the two sexes.”

So while both sexes enjoy the benefits of oxytocin, men are still hardwired for to be free and independent. As women are hardwired to bond, a woman can develop an attachment for Mr. Bad Boy, Mr. Right Now, and good old Mr. Wrong. The only way to avoid this is to invite your brain to the party, in order to use your best judgement. 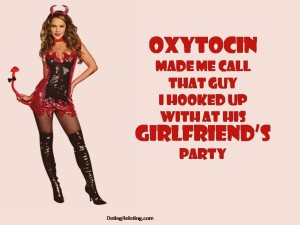 How to Manage the Effects of Oxytocin

Regardless of the intensity of your emotions, you do not have to react to every trigger that makes you anxious. To sidestep the desire to reach out your guy at the wrong time, create a new habit to help yourself. Put a rubber band on your wrist, and snap it whenever you want to call or text. A less painful method would be to enlist a friend that you can call or text when you’re having a hard time. Another trick to avoid calling him is to do your nails. Either do them yourself at home, or go to your local nail shop. It will be a nice way to treat yourself, and it will kill time and provide a distraction. By the time you’re done, your anxiety will have subsided, and you avoided embarrassing yourself. But whatever method you choose, remember that you are still the boss of you, and can refrain from behavior that gets you thrown out of local establishments. 🙂 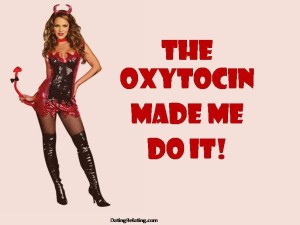 If you want to learn how to manage your romantic anxiety, and other wild oxytocin-inspired emotions, check out He’s That Into You, He’s Just Not Ready, written by Katarina Phang, “The Man Whisperer”