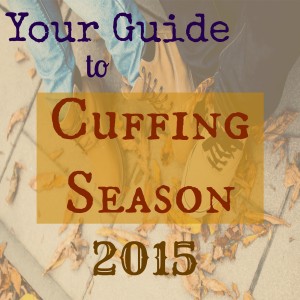 The Meaning of Cuffing Season

Today is the first official day of Fall, so you know what that means – falling leaves, pumpkin spice lattes, and cuffing season!  This annual –yet unofficial – tradition, enjoyed and experienced by many, is a time of holding hands, snuggling at fireplaces, and cozying up to one special person. Until break up season occurs in the spring, of course!

If you’re a single woman who just packed her swimsuits and shorts away for next year, you may be looking for your cuddly clothes to wear with your winter boo for cuffing season.

By the way, you may have been participating in cuffing season, and never knew what it was called. If you ask me, it’s all human nature. When temperatures drop, humans get cold, and want to snuggle. When bikini season returns, it’s back to every woman for herself. So here’s the DatingRelating.com guide to Cuffing Season.

Cuffing Season – The Meaning of it All

The most interesting thing about Cuffing Season to me, is that not everyone who participates even understands that it’s a natural phenomenon. From my research, the term “Cuffing Season” is used primarily by African-Americans, but if you ask me, the natural tendency that folks have to find a cuddle buddy in the cooler months is UNIVERSAL!

Elle Magazine did an article on “Indoor Boyfriends” last year, and I’ve also heard the term “Winter Boyfriend”, but no one is using those terms consistently. The term “hiberdating” used to refer to your girlfriend who ditched you after she found a man, is now also being used to describe the practice of seeking a cold weather boyfriend. But none of those terms are used consistently. However, the term “Cuffing Season” has a long history of use, and has even inspired songs by African-American recording artists (like “Cuffing Season by soulful crooner Eric Bellinger), so I’m going to do my part in this article to help the term go worldwide. Because even if you don’t have a name for it, that doesn’t mean that you’re not participating in it!

When is Cuffing Season?

Cuffing season is believed to start in the Fall, when the weather is starting to get cooler. You’ve packed away your shorts and flip-flops, and started reaching for sweaters and jackets. The Fall season is pretty romantic to begin with, as you have the brisk air, and leaves turning lovely colors. As soon as things get cool weather-wise, folks are looking to hold hands with SOMEBODY.

This time of year is filled with all kinds of holidays, Thanksgiving, Christmas, New Years’ and Valentine’s Day, which many people hate to spend alone. Single people often dislike this time of year when Cuffing Season couples are looking oh so snuggly and smug – or announcing their engagement. “Winter is a popular season to get engaged, says CharLena Pearson-Fulcher, author of New York City Budget Weddings: Elegant and Affordable, “From Christmas to Valentine’s Day, lots of engagements will be announced.” Unhappy couples holding on past their relationship’s expiration date will often get a “second wind” in order to make it through the end of the year.  And if you happen to break up during this time of the year, it’s the worst because everyone else just seems so gosh darn happy with their winter boo.  As John Mayer sings in “St. Patrick’s Day”, “No one wants to be alone at Christmastime…”

The End of Cuffing Season, aka Break Up Season

I should also warn that not all cuffing season relationships will go the distance. These relationships fulfill a specific purpose (keep you warm and sexually satisfied during those cold weather months), and when that purpose is fulfilled, say around spring, many of those relationships end. So Cuffing Season usually ends when Spring Fever begins. Hence, the beginning of Break Up Season. To again quote John Mayer, “…and we’ll all be safe til St. Patrick’s Day…”

Here’s an infographic of break up season on Facebook, created by data journalist David McCandless with Lee Byron in 2008 for McCandless’ book The Visual Miscellaneum. His follow up infographic book Knowledge is Beautiful was published October 2014. 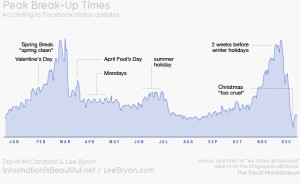 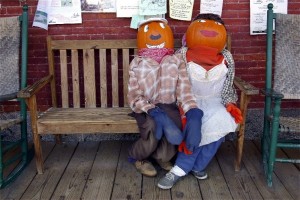 If you are enjoying cuffing season, and interested in taking your winter boo all the way to next summer and beyond, check out “He’s Really Into You, He’s Just Not Ready” by Katarina Phang, The Man Whisperer.